It’s a known fact that ‘Elf on the shelf’ has sweeped through the homes of young children in Britain, as a modern-day Christmas tradition following the book by author Carol Aebersold – “The Elf on the Shelf.” Little did she know her modern twist on the old american tradition she wrote over a cup of tea with her daughter in mind, would turn into many a family tradition. Once you’ve committed to be puppet master to this red mischievous character, there is no going back!

What is the purpose of ‘Elf on the Shelf’?

The story book which has won various awards including Best Toy and Creative Child Awards in the USA, tells the story of Santa Claus sending ‘scout elves’ on a top secret mission into the real world, into the homes and lives of young children who believe, to watch over them and report back to Santa to ensure the child keeps up good behaviour in the run up to Christmas in order to earn their presents Christmas morning. The scout elf’s magic only works by being named and loved by the child they’re sent to. At the end of each day the elf makes it’s way back to the North Pole with a good or bad report, through their elf door often mysteriously appearing along the skirting board somewhere in the family home on the 1st December.

However these elves are not just messengers, they also have a mischievous streak and cause havoc in the night. Freezing still as a statue come morning, being caught red handed doing all sorts of fun or naughty activities while the house sleeps. Sometimes the elves will leave footprints, notes, certificates of good behaviour or even sweets depending on how the child(ren) are behaving. With one small snag! If the elf is touched, it loses its magic.

” There’s only one rule that you have to follow, so I will come back and be here tomorrow: Please do not touch me. My magic might go, and Santa won’t hear all I’ve seen or I know. ”

Elf on the Shelf tradition + babies/toddlers

While this tradition of being a puppeteer to a mischievous elf is very creative and captures the imaginations of children and adult a-like, there is one small problem. How do you explain to older babies/toddlers NOT to touch the elf? Many a parent has encountered the problem (especially if their family has multiple children of all different ages) that there’s a massive struggle with setting up the activities for the children to come down to see in the morning what the elf on the shelf has been up to as you end up having to keep their antics up high, out of reach of the younger ones so the older ones who are old enough to understand the rules don’t get upset that their baby brother/sister has randomly grabbed the elf and unintentionally took away its magic.

The last few years doing Elf on the Shelf with my youngest under 3 has been interesting to say the least. I have found it increasingly harder to come up with new, creative ideas as what to make the elf do, when I’ve got to make sure it’s out of reach so Ava doesn’t grab and run off with the poor bugger and Abbie therefore having a humongous meltdown. The struggle is REAL but I wanted to share some of the activities we’ve succeeded with having a toddler in the house to help others still be creative, but practical with their elf antics! 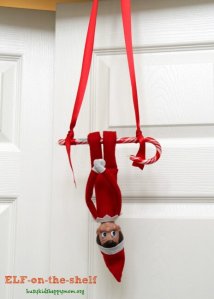 Simple, easy to make, materials already in most homes and takes 2 minutes to recreate. Hang your elf from the top of a door/arch way or perhaps even off a shelf, out-of-the-way of little hands.

Simply get a sharpie and turn a bunch of bananas into the ever popular Minions from the Despicable Me. Doesn’t ruin the bananas in any way and your tot can pretend they’re eating a minion instead for a bit of fun! This idea can be set up on a kitchen windowsill or inside a kitchen cupboard for a bit of hide and seek fun, yet still out of reach without the help of a grown up. Win-win!

Again out of reach and can be done in any room where there’s enough space on the wall. All you need is some cheap present bows and maybe some additional sellotape and you can make your elf look like she’s in one sticky position… 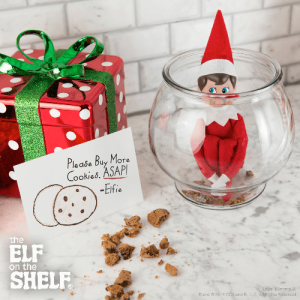 This one is particularly good because the elf is contained in something, so technically you could move the jar wherever out-of-the-way, and therefore not touch the elf as per the rules. Push it far back on the kitchen worktop and you’re set.

It’s no secret that elves love family photos, by securing the elf on top of a wall mounted picture frame you won’t need to try to move it into a more practical place away from the tot and you could even go a step further and sharpie mustaches on the glass of some family photos for a giggle.

Using a small plate, sprinkle rice or flour on top to fill it right to the surrounding edge, place the elf ontop and sweep it back and forth to make it appear the mischievous little elf is wishing for a white Christmas and therefore is practicing making snow angels! The practicality of doing it on a plate is you can place it wherever appropriate so the elf isn’t tempting to touch as much. 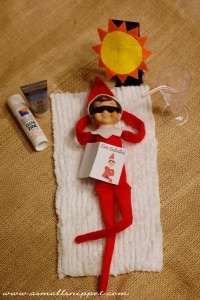 From one extreme to the other, try this sunbathing idea. You could use a old kitchen cloth as the towel and simply cut out a pair of sunnies and sunshine to show how your elf is missing the warmer months. Putting it up high on a windowsill shows they want more of a natural tan and keeps them away from curious littles!

Perhaps your elf has a sweet tooth and can’t help but raid the fridge late at night looking for some goodies to munch on. In the fridge is a great hide and seek spot for the littles to figure out, while also incorporating the “out of sight out of mind” technique with younger ones.

You can use all sorts around the home to make it look like your elf is flying free from A to B. String, blind cords, shoe laces, Christmassy ceiling decorations, whatever will work and have the same illusion.

10. Trapped in a balloon 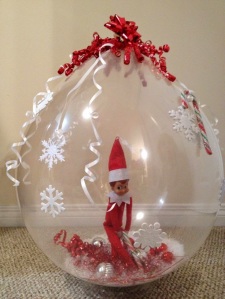 This one is quite popular, although be warned it’s a tough one trying to get the elf actually inside the balloon, the secret is to use water balloons instead and sellotape the balloon with the elf trapped inside to the ceiling light shade or ceiling fan to the littles can see but cannot accidentally break the magic spell.

Do you do the Elf on the Shelf tradition in your family? What are some of your favourite elf antics? Share in the comments…