In 2016 we embarked on what some may say was a very ambitious adventure of our 1st family holiday. Reason being we aren’t your average family of 4 with just budgeting and small children to contend with (both of which are hard enough!) Put in the fact I, their Mother am a full-time wheelchair user and a full-time powerchair user at that and our holiday just got a lot more complicated and sadly, a lot more expensive…

Upcoming in this series focusing around our family holiday to Costa Almeria;

This post is going to focus on how we managed to get around without hiring a WAV (wheelchair accessible vehicle) as neither of us drive. Right from coming off the plane at the beginning of our trip to being dropped back off at the airport 14 days later.

Although I had some initial ‘teething’ problems shall we say with budget holiday website OnTheBeach.com, they did set up the most amazing accessible airport to hotel transfers for us for £45. I was particularly worried about the transfers so I did ring on several occasions up until our travel date to make triple sure that what they had booked was going to work for us. They assured me over the phone that we’d be collected by a wheelchair accessible vehicle that was big enough for our family, my powerchair, Ava’s pushchair and our 2 weeks worth of luggage. Considering black cab travel here in the UK doesn’t work if we all want to travel together, you can see why I was nervous!

I needn’t have been! We arrived late at night, around 9:30pm UK time at the tiny Almeria Airport that seemed eerily deserted. We felt like we walked with the kids, luggage, me driving my powerchair for miles worth of shiny floors and pitch black night floor-to-ceiling windows before we found our way out. Right as we came through the exit to descend down their wheelchair ramp, a man was waiting with the surname on a large strip of cardboard. Much to our relief!

We felt like celebs being whisked away from prying eyes of the paparazzi! Definitely not used to holidaying… The driver who didn’t speak a word of English did a lot of motioning which was quite easy to get your head around. The relief was immense when he led us to a large mini bus with a wheelchair tail lift that looked like we could of fit 2 more families in! My head didn’t even scape the ceiling of the mini bus (as it normally does as I cannot bend and have a headrest). I was surprised when he started clamping my chair down like a pro, only because I’ve travelled in similar back home in Manchester only for the driver to tell me he’ll just go slow to avoid trying to remember his tie-down training. Next the young man jestered to Mark where we should put our then 4yr old and 10 month old. He pointed to a booster seat for Abbie and motioned to put baby on his lap with seat belt around both. He kindly hauled all our luggage and pushchair single handed into the back with me as Mark has a sleeping Ava to contend with. Very kind guy. He even put on an English speaking radio station on a whim I can only imagine to try and make us feel more at home. We couldn’t of asked for a nicer driver or better transfer experience. Off we were on the 45 minute drive to the Hotel Sabinal in the small town of Roquetas de Mar.

Getting Around Roquetas de Mar

On day 4, I got bold and started to quiz the hotel reception staff about if the public transport in the area was wheelchair friendly. Although initially she seemed nervous to give her answer as if we’d be upset, she confessed she thought it was but wasn’t 100% sure. That was enough for us, we needed to get to the local shopping centre, the ‘Gran Plaza‘ as despite my pre-holiday online research there wasn’t a local pharmacy that stocked the baby formula Ava was on and we certainly didn’t want to try and change brands on holiday incase it upset her sensitive tummy. According to good ole faithful Google, we could find the Spanish equivalent of Aptimil in a small super market that resembled Tescos in the mall.

So we went to the nearest bus stop and planned to basically wait and hope the driver spoke English to ask if it was possible to put a wheelchair user on. We didn’t have to wait long as they were every 10 minutes! What pulled up more resembled a large coach rather than a bus. Mark went up the steps and I could see him motioning back to me and the littles and the driver nodded. There was a wheelchair symbol on the side of the bus aswell just like on our UK buses. The driver started getting out, all the while I’m thinking there’s no way I’m getting on this coach thing, that he’s probably going to ask me to get out my wheelchair which obviously I couldn’t do. But no, he went midway up the side of the coach, grabbed a hidden hand control and out popped a tail lift! Oh my gosh, we were in access heaven! We popped Ava on my knee and put my lap belt around her while Mark folded up the pushchair to be stored away under the coach. Up Ava and I went in the lift to be greeted by a crowd of smiling passengers wafting themselves with fans or sporting sun hats. 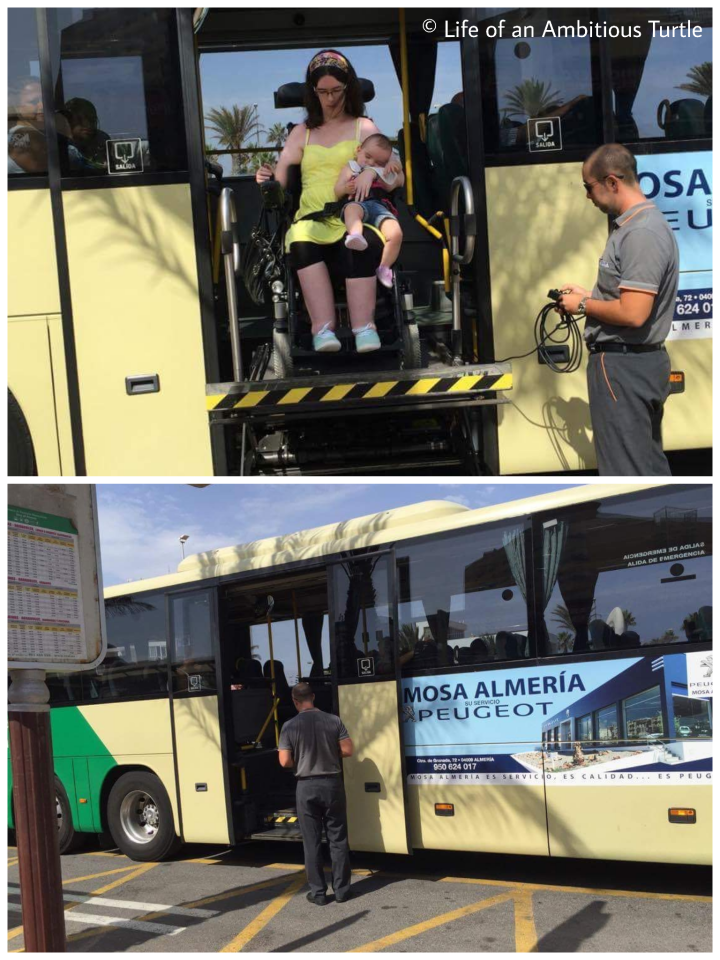 Once inside they had space for 2 wheelchairs (by my judgement). The driver spoke some English and told me to park over the tracks on the floor. Then I was tied down here too! On UK buses us wheelchair users hold on to the poles for dear life. He even put a belt around me. There was no groaning from the other passengers about how long this was all taking and the driver remained in good spirits. The whole ride to the shopping centre we couldn’t stop talking about how amazingly accessible Spain appeared in comparison to the UK thus far.

When we arrived at the mall, Mark pulled a string near me that was on my level, only because Ava was now asleep and I’d need two hands given my arm weakness. The driver was whistling away as he went to get the lift out again to help us off. Only after a few minutes I noticed he was on his radio phone. Ot oh! Mark and I looked at each out anxiously knowing this could very well mean the lift has broken down. The driver put up a good fight with it, he got his tool bag out, started unscrewing bits, putting them back together and as a last resort started banging the lift with a small hammer to try and jump start it. By this point a group of young Spanish lads came to the middle of the bus to see what the hold up and commotion was. They were speaking frantically in Spanish, looking at me then the lift and back again. One of the men motioned to Mark to look at his phone screen, he’d brought up Google translator.

Although it was hard to make out still, the gist of it was they were telling us they were about to lift me, in my powerchair off this very high coach! If you’re not familiar, powerchairs are extremely heavy and mine weighs around 350kg.

I was bricking it. I gave Ava to Mark to get the girls down onto the pavement to get Ava back in the pushchair and out the way of the group incase this went very wrong. I envisioned myself in their local A+E with some injury from being dropped as I really didn’t think, even between these young strapping men they could lift my powerchair with me in it safely down without incident. Before I had too much time to panic over it, 6 men grabbed the bottom frame of my chair and slowly and smoothly lowered me off that bus MANUALLY! This would of never happened in the UK, I’d of been stuck on that bus hours waiting for the fire brigade.

We couldn’t thank these lads enough. They got a big round of applause from the other passengers and big hugs from us. We could barely communicate yet they saw we needed help and they risked themselves to help get me off that bus safely. I’m getting all choked up writing this but gosh, I was so overwhelmed with gratitude. For this I’ll always love the Spanish, they know how to take care of those who are in need.

Now able to breathe again and re-instored faith in humanity, we went on our way in search of Ava’s formula.

Outside Hotel Sabinal there was always a horse and carriage for hire for €30. Although we didn’t get a chance to experience that, mainly because we were on a budget spending money wise. We did enquire about its accessibility and discovered that we could loan a manual wheelchair with head support for the day from the local Mobility Shop and I could participate in a horse and carriage stroll up and down the boardwalk of Roquetas de Mar beach front.

Roquetas de Mar, where we stayed was very flat with dropped kerbs everywhere. We explored quite a bit and I didn’t have issues with pavements or back tracking through lack of dropped kerbs.

All restaurants and cafes we went to had access, either on the flat or had a little permanent ramp at the front. Only one cafe (which was known locally as the place to to for your traditional British fry up) was I only able to be seated out the back on an outside table, no big deal was it was a shaded area. We visited Flamingos Café for Spanish omelettes many a morning which I’d really recommend, they were great for Ava who we were doing baby-led weaning with at the time too!

The same company was booked for the return to the airport at the end of our stay. I had enquired during the 14 days how much it’d be to use them to visit nearby places instead of taking public transport. I was quoted €30 to the Water Park that was literally 2 streets away. Again, sadly out of our budget but at least it was optional. Given our experience with public transport though we didn’t really need to only use taxis.

We received the same great service on the way back to the airport, same vehicle and features. Unfortunately both girls ended up being sick on the way back. Not sure what happened there but that’s kids for you. Never a dull moment! Luckily the driver was very sympathise offering us a box of tissues to clean up and fortunately whatever happened only happened once and they were totally back to normal for the flight home. 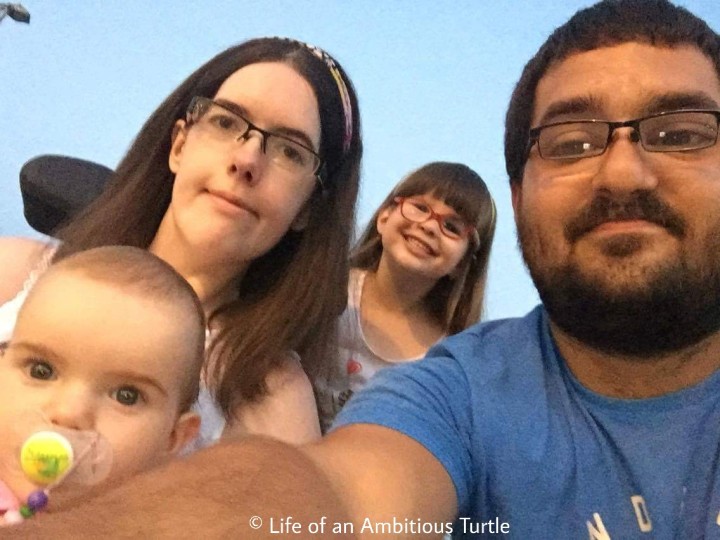 If you have any questions about this area, places or company’s mentioned don’t hesitate to contact me via the tab at the top of the website. I hope this and been helpful and if you’re thinking of going here, you have a wonderful holiday as we did!

4 thoughts on “Getting Around Costa Almeria | As A Wheelchair User”